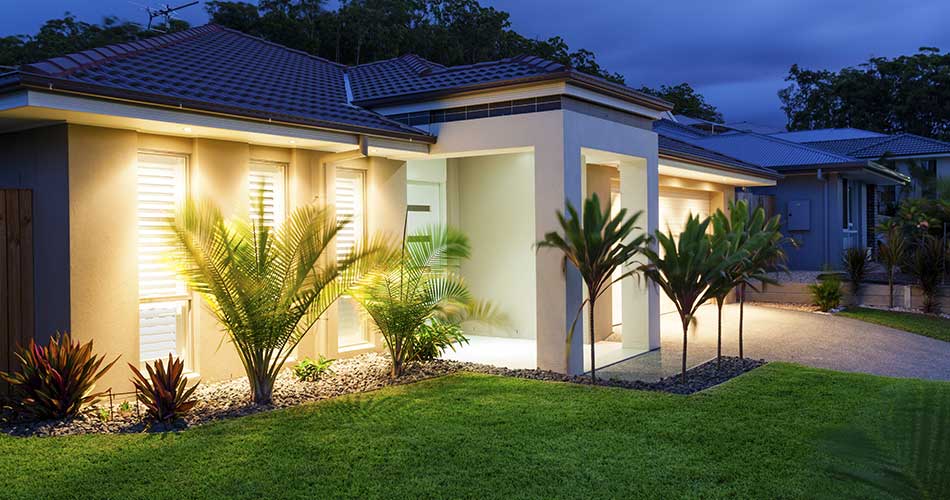 Home security systems are only as strong as their weakest link, and if you set up equipment that’s too complicated for household members to use, they are likely to ignore the equipment or work around it. Remember that the people in your home are part of any security arrangements you make, so you have to be realistic about how much hassle they are willing to accept in the name of security.

1. Be sure your home appears occupied.

Most thieves are opportunistic. They come into a neighborhood and look for houses that seem undefended and unoccupied. An important part of home security is making your home look occupied at all times.

One big clue that you are out of town is if your mail or newspapers are piling up. Never allow newspapers to accumulate in the front yard.

Interior lights are also important in making a home look occupied. Not only should some lights be on, but the array of lights should change just as it would if the home were occupied. The easiest way to do this is with timers.

Another very simple way to make a house appear occupied is to leave on a TV or radio with the volume turned up loud enough to be heard by someone approaching the doors or windows.

Leaving a car in the garage or driveway can also be a deterrent. If you are going on a trip and not leaving a car at home, you might want to make arrangements with the next door neighbor to park one of their cars in your driveway while you are away.

Another important home security measure involves making it difficult to get near the home. This is most commonly accomplished by a high wall or fence.

In many parts of the world, this is the primary home security tactic, but it does suffer from some shortcomings. Generally, it is easier to sneak undetected over or under a wall or fence than it is to force entry into a home.

Yet perimeter defenses often give occupants of the home a false sense of security that may lead them to get sloppy about locking doors and windows. For this reason, perimeter defenses are most effective when they are either very difficult to penetrate or are augmented by cameras and/or motion detectors.

3. Be sure all entrances are well lit.

For most homes, perimeter defenses like walls and fences are of little use. Most people assume that the next line of defense is doors and windows, but there is something that comes first. It’s based on the simple fact that thieves want to do their work where no one can see them. This means you want to make sure the outside of your home is well lit – especially at any potential points of entry. An effective solution is motion detector lights. These inexpensive devices can be set up to turn on whenever something moves near it.

4. Install deadbolts and peepholes on doors.

Most home security measures are concentrated on doors. With doors, the two main issues are structural integrity and locks.

Recommended for exterior doors, deadbolt locks are substantial locks that lock the door into the frame. Deadbolts come in keyed versions, which always require a key and levered versions that only require a key to open from the outside. If no glass is nearby, the lever version is best as it is more likely to get used.

Sliding glass doors present a special challenge. Most are vulnerable to breakage. The simplest security enhancement is to place a metal bar or broom handle in the inside floor track. Some sliding doors can simply be lifted out of their tracks. There are screws at the top and bottom of the inside of the door that control how it sits in the track. Adjust these so that the door cannot be lifted so high that the bottom comes free from the track.

Every front door should be equipped with a peephole. This is a very inexpensive, easy to install device that allows you to check out a visitor before you open the door. For the same reason, an intercom can allow you to communicate with a caller before deciding whether to open the door or deactivate an alarm.

While your home may only have two or three doors, it may have a dozen or more windows. Burglars know that if you systematically check all the windows in a house, there is a good chance that at least one will remain unlocked.

Most standard window locks are very simple to jimmy or force. Heavier locks will improve your home security quite a bit. Another simple, inexpensive tactic that is effective for double hung windows (those with two sliding panels that go up and down or side to side) is window pins. There are specially made pins, or large nails can easily be used.

Exterior doors and windows are not the only access points to most homes. Many thefts take place through garages. Besides having valuable items stolen from the garage, the door that goes from the garage to the house is often unsecured or not substantial enough to stop a burglar.

Check also to see if skylights, crawl spaces, attic vents, and other openings may provide burglars with unrestricted access to your home.

Alarm systems offer little in the way of physical obstacles to thieves. Instead they offer an important psychological one.

In a neighborhood with an efficient police force, the alarm substantially increases the odds that the thief will get caught. Even in areas where police response times are slow, the noise and attention of an alarm may well dissuade the burglar from finishing his mission.

The cost of alarm systems varies widely. A burglar easily can disable some of the simpler, less expensive detection devices. The more complex and unfamiliar the array of devices, the more likely the burglar is to trigger the alarm or give up trying to disable it.

The second factor is the protocol you request that the monitoring service use. Who do you have them call in what order? In some cases, you might do better to alert a helpful neighbor than to alert an unresponsive police force.

The third factor is the 911 services in your area. Most work well and a few don’t. While you have no direct control over the 911 services, you may be able to draw attention to the problem and seek a solution through the political process.

8. Keep a record of your valuables.

Most area police departments encourage homeowners to etch their social security number on the metal surfaces of valuables that are prone to theft. When police come across marked stolen merchandise, they can easily find the true owner and return it. Photographs of especially valuable items like artwork and antiques can help police recover goods.