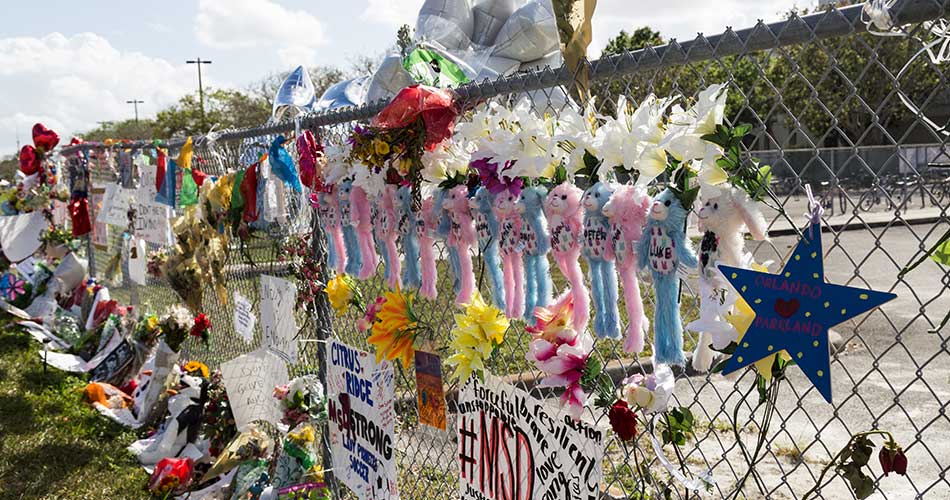 Something familiar happened in America on February 14, 2018: A gunman walked into a school, and shot and killed 17 students and staff in a horrific act of violence.

But then something unfamiliar happened: State legislators — inspired by a movement led by the student survivors of that mass shooting in Parkland, Florida — started passing legislation to restrict gun access.

“Legislators are starting to realize that mass shootings can happen in their state anytime,” said Allison Anderman, the managing attorney at the Giffords Law Center, a gun-control organization founded by former U.S. Rep. Gabby Giffords, the Arizona Democrat who survived a shooting in 2011. “And they don’t want to be in a position that this kind of thing can happen in their state at all.”

State lawmakers still managed to expand gun access with at least 10 new laws in seven states. These measures — from allowing guns in K-12 schools to bolstering “stand your ground” laws — continued to carry weight in certain parts of the country, even as the gun-control movement steadily gained steam elsewhere.

Before the October shooting in Las Vegas, when a gunman used a bump-stock attachment to quickly kill 58 people and wound 851 others, Hawaii lawmaker Karl Rhoads hadn’t given much thought to the devices, which can enable semi-automatic rifles to fire at the rate of fully automatic weapons, which are more strictly regulated.

But after the deadliest mass shooting in modern U.S. history, the Democratic state representative crafted legislation to make bump stocks illegal. The bill passed in a unanimous vote, and Democratic Gov. David Ige signed it in July.

“It was just obvious to everybody,” Rhoads said. “Hunters don’t use them. It’s a mass-murder improvement tool.”

Riding the wave of political will inspired by Parkland and feeling revolted by the mayhem of Las Vegas, 10 states in the past year have banned bump stocks.

Washington state lawmakers this year passed bills to ban bump stocks and to keep firearms out of the hands of convicted domestic abusers.

But new restrictions on so-called assault weapons couldn’t make it out of the Democrat-controlled Legislature.

Evan Hughes, the vice president of NRA Foundation Projects at the Vermont Federation of Sportsmen’s Clubs, a gun-rights group, said these bans are “unenforceable and will do nothing to deter violent crime.” Vermont was one of the states that passed a bump-stock ban this year.

In Hawaii, which has an estimated 1.6 million registered guns, according to the state attorney general’s office — around 150,000 more guns than residents — some people have legitimate reasons to own firearms, Rhoads said, alluding to the state’s feral-pig problem. But, he said, there’s still a desire to pass gun-safety measures. Hawaii has some of the strictest gun laws and fewest gun deaths in the country, according to the National Center for Health Statistics.

“For us, it’s taking away the final loopholes,” Rhoads said.

The 9th U.S. Circuit Court of Appeals recently dealt a blow to Hawaii’s strict gun laws when a three-judge panel ruled in July that the state’s requirement for a gun license violates the U.S. Constitution. The state, however, may appeal the decision to the U.S. Supreme Court.

When the next legislative session starts in January, Rhoads said, he plans to either introduce or co-sponsor an extreme-risk protection-order bill, joining eight other states that have enacted similar laws in 2018. These measures, sometimes called “red flag” laws, allow law-enforcement officials to disarm people who may be violent after receiving requests from police or family members. Washington state voters approved a similar law in 2016.

Vermont, which until this year had some of the loosest gun laws in the country, passed several measures to tighten its laws, including a ban on guns in K-12 schools, a red-flag law, and a law that expands background checks and bans high-capacity magazines. Republican Gov. Phil Scott drew heated backlash from the state’s gun owners for signing the bills, as some protesters called him a traitor.

Colorado soon may move on this issue. Disturbed by the recent shooting of a sheriff’s deputy, a bipartisan group of elected officials in the Centennial State want to renew a debate over the extreme-risk protection-order laws. Police say the man who killed the sheriff’s deputy had a history of troubled mental health.

Before this year, five states had red-flag statutes, but the National Rifle Association (NRA) is still working behind the scenes in state legislatures to defeat this legislation. Three bills remain under consideration this year in Michigan, Ohio and Pennsylvania. (The NRA did not respond to repeated attempts for comment.)

In Michigan, for example, Republican Gov. Rick Snyder suggested a red-flag law was worth studying after a double homicide at Central Michigan University this spring. Some fellow Republicans, though, worried about the due-process rights of gun owners who may have their firearms unjustly stripped. The bill hasn’t moved through the Legislature since being introduced in June.

According to the Gun Violence Archive, an oft-cited nonprofit that tracks shootings, there have been more than 200 mass shootings in the first seven months this year. Mass shootings are defined as attacks where there are four or more fatal and nonfatal injuries, not including the shooter. There have been more than 260 school shootings since the national consciousness was shaken in 2012 when 20 first-graders and six school staff were slaughtered in Newtown, Connecticut, Gun Violence Archive data show.

The last widespread success at enacting laws to curb gun violence came in 1994, when the federal assault-rifle ban passed, said Richard Aborn, who at the time led the Brady Campaign to Prevent Gun Violence, one of the loudest voices during that debate. Since then, he said, there hasn’t been national momentum for more gun-control legislation.

A Pew Research Center poll in 1993 showed that 57 percent of Americans thought controlling gun ownership should be a priority in the United States over protecting gun rights. But in the past decade, the views of Americans shifted.

Two years after the Newtown massacre, 52 percent of Americans said it was more important to support gun rights, while just 46 percent prioritized restricting gun ownership, according to a Pew poll. President Barack Obama tried and failed to persuade Congress to pass comprehensive background checks or another ban on assault rifles and high-capacity magazines.

It’s been nearly six years since Newtown, and most of the hundreds of state gun laws enacted in that time have expanded, rather than restricted, access to firearms.

But, now, there’s a change in the gun debate, said Aborn, who is the president of the Citizens Crime Commission of New York City, a criminal-justice nonprofit that advocates for gun-violence prevention. The student survivors of Parkland have been able to score victories in the political arena by immediately organizing, he said, and it’s made a major difference in state legislatures.

“This is the emergence of the second gun-control movement,” Aborn said. “This is the cumulative effect of all of the shootings since Newtown.”

Opponents of gun-control bills also have had some successes this year.

South Dakota’s Jensen, who thinks his state gun laws “could be eased up a little bit,” co-sponsored a new law this year that authorizes nonpublic schools and houses of worship to allow firearms on premises. South Dakota already allows armed sentinels at public K-12 schools through a law that was passed after Newtown.

“Out in this part of the country, ‘no guns allowed’ signs mean squat here,” he said. “We’re a rural state, and a local sheriff’s department response time may be well beyond the time to have a mass shooting.”

When a gunman killed 25 worshippers including a pregnant woman, injuring 20 others, in November at a church in Sutherland Springs, Texas — a small, rural town east of San Antonio — it wasn’t police who first responded to the scene, but an armed neighbor who ran out of his home and shot the assailant twice.

South Dakota’s law was among a handful of new measures that gun-rights advocates got through state legislatures this year. In Florida, the governor signed a law that allows K-12 school personnel to carry a firearm with authorization from a school district, while lawmakers in Idaho and Wyoming expanded “stand your ground” provisions. Measures to bring guns to K-12 schools failed in 19 states this year, while permitless carry bills failed in 11 states, including in Oklahoma, where the bill was vetoed by Republican Gov. Mary Fallin.

In Texas, which had its own school shooting in May — eight students and two teachers were killed, and 13 others injured — Lt. Gov. Dan Patrick said in July that neither he nor fellow Republican Gov. Greg Abbott support extreme-risk protection-order laws, and that he doubts a measure would garner the support of a majority of the Texas Senate. Instead, the state is looking at increasing police presence at schools, arming school staff and developing mental-health-screening programs.

We have many gun safes for you to store your guns, contact us today to see how we can help you.