Experts Say Internal Locks On Classroom Doors Could Save Lives

HomelocksExperts Say Internal Locks On Classroom Doors Could Save Lives 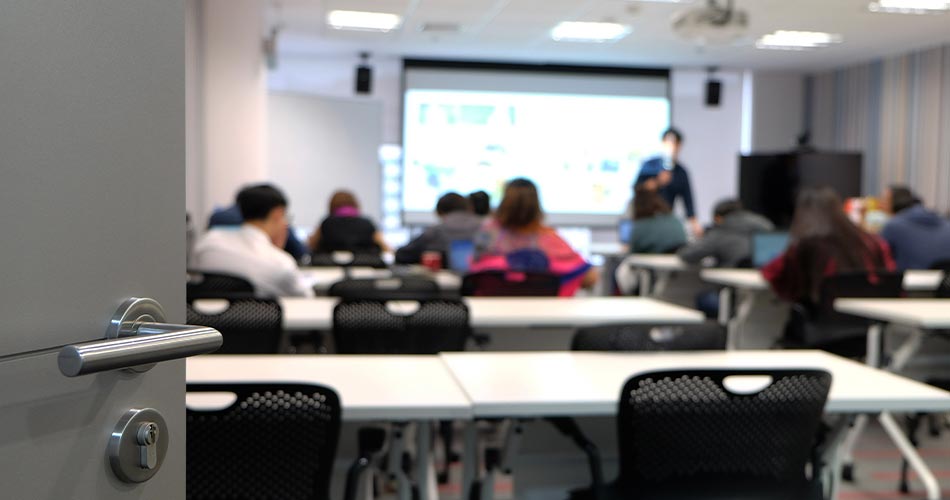 BLACKSBURG, Va. (AP) – After a student gunman killed four of his classmates and his German teacher and then left, Derek O’Dell had to wedge one of his sneakers under the classroom door to keep the attacker from returning to kill even more.

There was no lock on the door to protect Derek and his wounded classmates against Seung-Hui Cho, who killed a total of 30 students and faculty, plus himself, at Virginia Tech’s Norris Hall.

Safety experts say that while school officials across the nation re-evaluate campus safety in the aftermath of the Virginia Tech tragedy, many are overlooking a simple solution: putting locks on the inside of classroom doors.

“It’s not the complex systems that cost millions of dollars.” O’Dell was shot in one arm, but he and some classmates barricaded the door to Room 207 with his shoe and their bodies – “the heaviest thing in the room was bolted down and the desks were pretty flimsy,” he said – as Cho returned twice to try to finish them off.

When he couldn’t get in, Cho stepped back each time and fired a round into the door, one shot penetrating O’Dell’s black fleece jacket but missing his body.

“It’s kind of crazy to think that you have 1½ or 2 inches of wood between you and a person with a gun who just killed half your classmates,” said O’Dell, who is working at a veterinary clinic for the summer.

Colorado, the site of several school shootings including the 1999 massacre at Columbine High School, has lead the push to put locks on the inside of classrooms doors, said Vincent Wincelowicz, vice president for the Foundation for the Prevention of School Violence at Johnson & Wales University in Denver.

Most classrooms, including those at Virginia Tech, lock only by key and from the outside. “A lock on a classroom door may cost $50 to $150, maybe $200 with installation, and it would certainly add a layer of protection that a security camera that’s being remotely monitored may not afford,” said Robert Siciliano, chief executive officer of PublicSchoolSecurity.com and author of “The Safety Minute: Living on High Alert.”

“Right now there’s nothing off the table, nothing on the table. It’s definitely a consideration,” he said. At Virginia Tech, that would involve about 170 general-use classrooms spread across 2,600 acres.

Hincker said the university must consider any problems the locks could create. In October, a man took several students hostage at Colorado’s Platte Canyon High School classroom and killed one girl.

“You gotta make sure that what you’re doing is going to be right for most instances rather than just one instance,” Hincker said. Even so, security experts say locks go a long way toward keeping out danger.

“You have to think in terms of we’ve got to have the least amount of tragedy and the most amount of saving, and that may be this key situation,” Wincelowicz said.

Interior locks may have saved lives during a 2005 school shooting on the Red Lake Indian Reservation in Minnesota, said Everett Arnold, principal of the reservation school of about 280 students.

Jeff Weise, 16, barged into the Red Lake school and killed five schoolmates, a teacher and an unarmed guard before taking his own life.

Weise earlier had killed his grandfather and his grandfather’s companion. Weise tried to get into several classrooms but failed because the doors were locked from the inside. “It was a large enough tragedy as is, but it could have been horrendous,” Arnold said.

“That simple precaution of being able to lock people out was a huge piece.” Still, some question whether changes are necessary.

“This is a fluke of an incident and school security shouldn’t have to be changed because of it,” said Clay Violand, whose French teacher and 11 classmates were killed at Virginia Tech.

Violand, 21, an international studies major, will return to Virginia Tech this fall. So will O’Dell, a 20-year-old biological science major.

“I know I lost four of my friends in that class, and there are countless other individuals who lost their lives.

There’s so much hope that they had and it’s all just ended,” O’Dell said. “Just increasing security, like a simple door lock, could almost prevent that.”